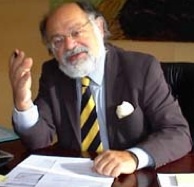 It is with great sadness that we inform you that former ECMA President Jacques Schor has passed away on the 4th of August 2016. Jacques Schor was President of ECMA from 1996 until 1997. He was the founder of CPC Packaging with its headquarter in Montreuil (France).

In the 50 Years of ECMA book he wrote as follows about his presidency:

'It was a great honour to serve as Chairman of ECMA with a superb team around me. In addition of the already existing activities, we started the opening towards the outside to make ECMA and our industry better known.

A systematic policy of press reports and lobbying was undertaken. The opening towards Eastern Europe was illustrated by the Prague congress and towards the East Mediterranean by the first congress in Istanbul.

The folding boxes industry sales conditions were drafted adopted and published. The strategic committee was founded and the chairmanship was reinforced with a 3 years mandate.

Finally I would like to pay tribute to the exceptional talent and efficiency of Mans Lejeune who has now been succeeded by his very able son and without whom a large part of this would not have been achieved.'

Jacques Schor will be remembered for his important contributions to ECMA and the European folding carton industry. Our thoughts are with his family, friends and colleagues at CPC.

Safety And Sustainability In Cartonboard: We Bring The Forest To You!

Pro Carton ECMA Carton Award - the finalists have been announced